Top 10 Libraries in Python You Should Know 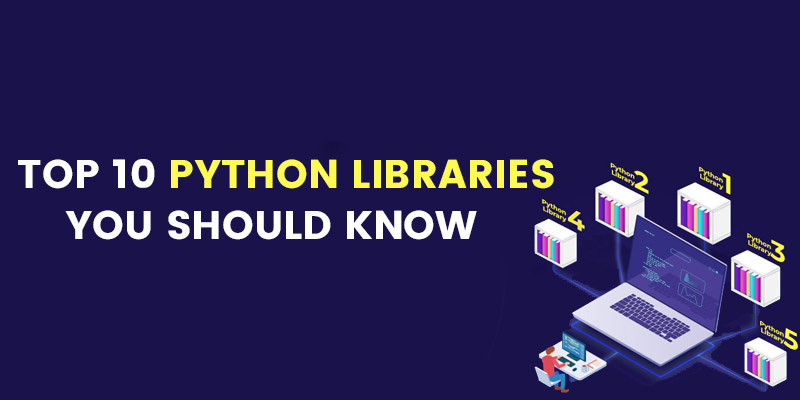 In our modern life, where technology plays a vital role, it is essential to be familiar with programming languages and how its real-world applications. One should be familiar with the key features of the various libraries in python and its applications. It is widely used in machine learning, data science, software engineering and many more. Individuals who desire to build a future in this domain can enrol in Python Training in Chennai to acquire hands-on training using various tools and libraries.

Python is commonly used to create software and websites, automate processes, and analyse data. Python is an all-purpose language, which means it may be used to make many various types of applications and isn't designed for any particular issues. Its adaptability and beginner-friendliness have elevated it to the top of the list of programming languages in use today.

In this article, we will dive into the popular Python libraries and the features that make them applicable to a wide range. Before we jump into that, let us take understand the meaning of the Python library.

What are Libraries in Python?

A library is a group of useful classes, methods, and packages that can be utilised to carry out the necessary tasks without having to create the functionalities from the start. A set of interconnected modules in Python make up its library. Python was created with exceptional libraries, which makes it very convenient for programmers to use it on a daily basis to resolve issues since they don't have to write the same code repeatedly. Python libraries are extremely important in the fields of Machine Learning, Data Visualization, Deep Learning, Data Science, and more.

Enrol at FITA Academy to understand further what makes Python a strong programming language. Let us now look at the top Python libraries essential to a programmer’s life.

Top 10 Python Libraries You Should Know

TensorFlow is an open-source Python library that is popularly used for machine learning operations and building efficient neural networks. Dataflow graphs, which are structures that show how data flows through a graph or a collection of processing nodes, are constructed by developers using TensorFlow. Each node in the graph represents a different mathematical equation. Most targets that are practical can run TensorFlow applications, including local machines, cloud clusters, iOS and Android smartphones, CPUs, and GPUs.

JavaScript is used to build machine learning models, and TensorFlow is used to run them directly in the browser. Learn to create and train prototypes based on JavaScript using adaptable and user-friendly APIs with the guidance of expert trainers of Java Training in Chennai. The lifecycle of your model may be followed using tools like TensorBoard and Model Analysis. TensorFlow Serving helps to run the machine learning models at mass production on the most sophisticated processors.

TensorFlow's platform aids in the implementation of best practices for data processing, model training and tracking, and process management. With a rudimentary understanding of the fundamental ideas and principles of machine learning, TensorFlow is simpler to utilise. To advance your skills, learn and put basic machine learning principles into practice.

Pandas is one of the popular open-source Python libraries for data science, data analysis, and machine learning activities. Pandas is a popular data-wrangling library that integrates effectively with many other data science modules within the Python environment. It is generally included in every Python deployment.

Programmers can read, monitor, analyse, manipulate, and save data with the help of the Pandas library. Pandas offer quick, adaptable data structures, like data frame CDs, that make it simple and natural to operate structured data. The Pandas library offers a really quick and effective way to organise and study data series, and data frames assist us in efficiently representing and manipulating data. The sophisticated alignment and indexing techniques included in Pandas perfectly handle the labelling and organisation of data. With the aid of a few of Pandas' functions, data cleaning and management of missing values is simple to complete.

Pandas offer a large selection of integrated tools for reading and processing data. Pandas allow for the merging and linking of datasets. For data scientists working with analysis of time series and related ideas, Pandas offers tools like rolling statistics and bandwidth conversion.

It offers ways to manipulate the identical n-dimensional array object effectively. Numerous mathematical operations can be carried out on arrays with NumPy. It provides a vast library of advanced mathematical operations that work on these arrays and matrices. Data Science Course in Coimbatore upskills the participants with knowledge of data structures to ensure effective calculations with arrays and matrices.

It is a general-purpose array-processing software that offers high-performance multidimensional objects known as arrays and tools for interacting with them. NumPy tackles the slowness issue in part by including arrays as well as operators and functions that perform effectively on these arrays. It offers quick, precompiled functions for mathematical operations.

Matplotlib allows you to create dynamic, animated, static and interactive visualisations. Matplotlib makes difficult things possible and simple things easier to operate. The graphical user interfaces and JupyterLab is supported by Matplotlib. It provides the foundation for countless third-party tools and packages. It is one of the best libraries for Python that facilitates the creation of plots suitable for publication.

Interactive graphics with zoom, pan, and update features can be created by programmers using this library. In terms of aesthetic layout and style, it also offers customisation options. In order to deal with a variety of arrays, Matplotlib supports a large number of file types.

It's widely used for data visualisation because of the charts and diagrams it generates. Furthermore, it provides an object-oriented API that can be used to add those plots to programmes. It supports a huge number of backends and output types, making it compatible with a variety of operating systems and output formats.

The largest machine learning library, PyTorch, creates dynamic computation graphs, calculates gradients automatically, and enables programmers to do tensor operations with GPU acceleration. Anyone with public access can view it. It has gained popularity and attracted many machine learning engineers since its release. Machine learning in Bangalore provides training using the PyTorch library for resolving problems in neural networks and ML applications.

PyTorch is extensively used for optimising tensor computations. It offers a variety of APIs and powerful GPU acceleration for tensor computations. It also aids in resolving neural network application problems. It is a library for scientific computing with Python that makes use of graphics processing devices. PyTorch is a popular deep-learning research framework that is designed to provide optimum agility and speed.

Scikit-learn is a well-known library for handling complex and big data in Python. It is an open-source library that facilitates machine learning and is one of the most important for data scientists. It supports a variety of supervised and unsupervised methods, including clustering, classification, and linear regression. It carries out Python for data mining and machine learning tasks, including dimensionality reduction, linear regression, grouping, model selection and classification.

Numerous modifications are being made to the Scikit Learn library, which includes cross-validation functionality that enables the use of several metrics. Numerous training techniques, including logistic regression and similar tasks, have shown some minor advancements. Scikit-Learn is amongst the essential Python libraries for data science that provides thousands of algorithms for deploying machine learning models. Data Science Course in Chennai equips you will the skills required to solve practical programming issues that deal with complex data sets.

Common neural network building pieces like layers, objectives, training algorithms, optimisation techniques, and a variety of tools to facilitate dealing with picture and text data are all extensively implemented in Keras. It provides a more straightforward way to express neural networks. Furthermore, Keras provides some of the best tools for creating models, working with data sets, examining graphs, and more.

Large prelabeled datasets are offered by Keras and can be directly imported and loaded. It includes a number of functional layers and variables that can be utilised in the design, setting up, testing, and analysis of neural networks. One of the most important applications of this library includes the availability of machine learning models that offer pre-trained parameters.

Theano is a machine learning library used for Python computations and multidimensional arrays. TensorFlow and Theano both operate similarly, although Theano is less effective due to its incapacity to function in manufacturing contexts. Theano expressions' real syntax is symbolic, which can be intimidating to newbies accustomed to conventional programme development.

In particular, expressions are composed, specified in an abstract manner, and then used to do calculations. With a rigorous testing phase and self-verification, Theano can find and resolve many holes and inconsistencies in the model. It is made to manage the processing that Deep Learning's massive neural network algorithms demand.

It manages the many kinds of computation specifically for Deep Learning's big neural network algorithms. Since its creation in 2007, it has become a mainstream technology for deep learning development and research, making it one of the first libraries of its sort. As of now, Theano serves as the foundation for a number of neural network projects, and its implementation and popularity continue to rise over time.

Light GBM is a gradient-enhancing framework built on decision trees that improves model performance while using less memory. Instead of using a level-wise technique, which would yield much simpler trees, it uses a leaf-wise split strategy, which results in considerably more complicated trees. This makes Light GBM one of the significant Programming libraries Python that yield high accuracy.

Light GBM employs a histogram-based approach, which accelerates the training process by bucketing continuous feature values into discrete bins. Reduced memory utilisation is achieved by switching continuous values to discrete bins. It is frequently used for the creation of data science applications because it also enables GPU learning. Get hands-on training using this gradient-boosting framework at the Python Course in Coimbatore.

SciPy is short for "Scientific Python." It is an open-source library used mostly for advanced scientific calculations. This library is based on a Numpy extension. Numpy supports indexing and sorting of array data, but SciPy stores the numerical data code. Engineers and application developers also frequently use it. It combines with Numpy to perform sophisticated computations. The documentation for every function in SciPy's submodules is detailed.

SciPy handles a variety of tasks with ease, including data analysis, calculus, and solving linear equations and algebra. There are several user-friendly routines for speedy computation in the package. All of the effective numerical methods, including optimisation, numerical integration, etc., are provided by SciPy using its specialised submodules.

In this blog, we have looked into the various libraries of Python. We have seen an overview of Python programming and its library. There are numerous other important libraries in Python that one should know about. FITA Academy’s Python Training in Bangalore helps you master the essential Python libraries by providing practical training and theoretical understanding.

Recent Post: Top 7 Roles and Responsibilities of a DevOps Engineer