Programming languages you should know to be a Full Stack developer 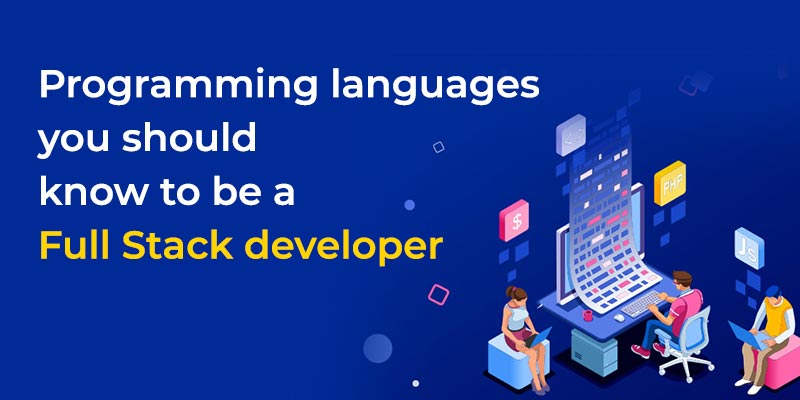 As web applications and mobile applications are witnessing rapid growth in the current trend, developers have a need to equip themselves with the latest technologies used in building digital applications. Big corporations are now on the look for professionals who can handle multiple tasks to leverage the performance of their establishments. Therefore a person has to widen their skill sets to improvise their capacity and role in being a dedicated candidate to their firms. FITA Academy provides the best Full Stack Developer Course in Chennai, with 100% placement support from mentors.

The same, a Full Stack developer should no less perform within their role and has to have a wide and in-depth knowledge of their domain. They are required to handle the work by developing their skill sets in and around their demesne.

There are many institutions providing full-time courses on Full Stack developer course across many cities, which we will see in some time.

With that being said let’s discuss the knowledge a Full Stack developer has to impart themselves with including their professional, analytical, and personal skills.

A Full Stack developer is a professional who generally has good knowledge of a variety of programming languages since they work on many aspects in building both web applications and mobile applications. They include building up user-interface(front-end), DBMS and server-side( back-end). All the developments demand separate sets of software languages to learn. Now let us discuss the languages one by one to understand the essence of them. Learning the Full Stack Developer Online Course will provide knowledge that will be used to create a strong career foundation.

The front-end is all about the web elements that a user interacts directly with, in a website that makes them engaging and interactive. Usually, the front-end side is built with three standard languages which are,

HTML is the standard language for creating websites since it gives the programmers an easy way to design and add content. HTML still remains the most sought language to buildweb pages even after the boom of the latest technologies. Its simple hashtags and design give the coders the advantage of defining web elements easier and faster.

HTML5 is the latest released version of the language which has the design, elements, attributes that lead to building more improvised and diverse web pages which can work faster than before.

CSS along with HTML is used to present the web elements in a more appealing manner so that the page has the right proportioned texts, colours, styles and design.

JavaScript is another front-end language mainly used for creating interactivity within web pages. The interaction is designed using multiple options which can be the search button on your blog, links to your social media websites, designing feedback and survey forms or anything that makes your web pages look engaging.

Another advantage of using JS is, the web elements and their style can be changed using JS after building a complete website both according to the users’ interaction and engagement. JS is also used in server-side programming through Node JS. So learning JS is an added advantage that you can use both in front-end and back-end to improvise your data manipulation techniques to present your work well.

The back-end development is about rendering strong server support for the front-end to work coherently. Any data that is entered into the website is fetched from the server and the database so that the front-end processes the requests faster. The server-side has multiple back-end languages to choose from.

It is enough for the developers to know any one of the back-end languages but most professionals know more than one language to support their career.

Some most sought back-end languages to create dynamic websites are,

It is dependent on the developer to learn best and implement his knowledge on web development practices. There are multiple online guides and training institutes to make one the best in their field. FITA Academy is one such training institute that offers multiple software courses to train students to their best limits.