Difference between the Router and Switch one must know about 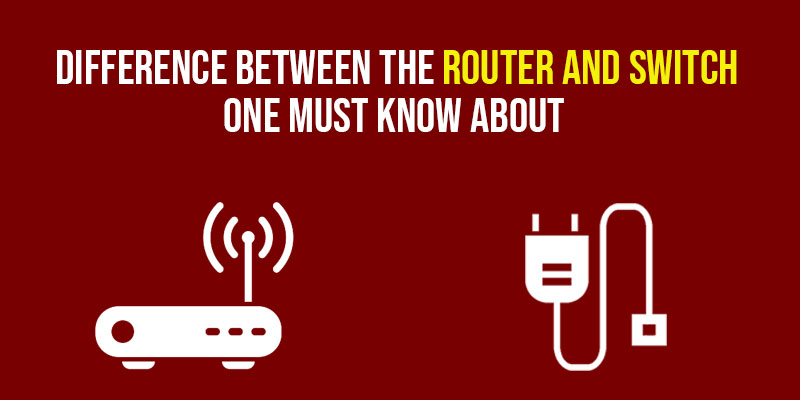 All of us are familiar with Wi-Fi networks. It is something we rely on daily. But have you ever wondered how it operates? How are we able to connect our devices from just one connection? In this article, we will find out exactly that.

If you take the case of an organisation, network switching and routing ensure that workers on one network may access business apps whether they are gathered in one office or dispersed among several sites. Productivity depends on ensuring that everyone is connected and has quick access to the business apps, data, and tools they require to perform their work. This is particularly true in the modern era of remote work when employees are more likely to access company resources from their homes. Your network must be able to handle remote workers to keep your business running.

Although network switching and routing have similar properties, they are two completely different systems. To learn more about this particular topic, you can join the CCNA Course in Chennai and get trained by expert professionals.

In this article, we will be looking at the must-know differences between routers and switches. Before we jump right in, let us have a brief look at what a router is and what a switch is.

What is a Router?

A router connects various switches and their separate networks to build a local network. It controls both data movement within the network and data entering and exiting it.

A router manages the network traffic between multiple networks. The connection at your home, for example, has one connection to the internet and one to the local network system.

So then, what is routing? Choosing a path between two or more networks is the process of network routing.

Now that we have a brief understanding of a router let us understand what a switch is.

What is a Switch?

A networking device that links various network devices, such as computers, printers, and servers, on a single computer, allowing users to share information and resources, is called a Switch.

The information delivered via networks in the form of electronic data may also be routed using this method. Switches are frequently referred to as bridging devices since connecting network segments is a procedure that is also known as bridging.

What does switching mean, then? Switching is the process of routing packets from one port to another that leads to the destination.

You can follow the course of FITA Academy to get an in-depth understanding of switching and routing. 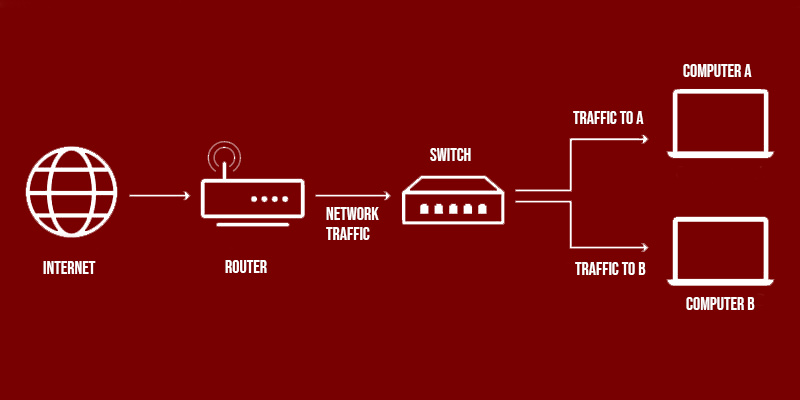 Now that we know the meaning of a switch and router let us take a look at their differences.

Router vs Switch: Must Know Differences

One thing to be noted about routers and LAN is router scanning. Router scanning is a hybrid attack approach that analyses organisation subnets and then attack routers that it discovers on both LAN and wireless routers. Router Scan is a hacking tool that allows hackers to scan routers and extract crucial information from wireless routers. Ethical hackers can use this tool to determine whether their passwords are attack-ready.

Join the Ethical Hacking Course in Chennai to gain a better understanding of how attackers behave when targeting their routers in this manner.

Although knowing the differences will be sufficient, it is important to know how it operates to have a better understanding of the networks.

First, let us take a look a the working of a Router.

How does a Router work?

A router monitors the network traffic between multiple networks, which also connects them. It has a single internet connection as well as a single private local network connection. The routers decide where to transport data from one computer to another.

So what about a Switch? How does it operate? Let us find out!

How does a Switch work?

A switch provides assistance in handling the data and is aware of the specific addresses needed to convey the message. It has the ability to determine which computer the message is intended for and transmit it right away. The switch's effectiveness can be increased by offering a quicker network speed.

Everything has a positive and a downside. So does a router and a switch. Although their positives tower their lows, it is still important to know it all. Let us take a look at the pros and cons of routers and switches.

Pros and Cons of Router

Here are some of the advantages of a Router

Let us look at the disadvantages of Router

It will be extremely advantageous to take up CCNA Course Online to have a better understanding of the networking systems.

Now that we looked at the router, let us take a look at the pros and cons of the Switch.

Pros and Cons of Switch

Here are some of the advantages of Switch

Let us now take a look at the disadvantages of Switches

Whenever we touch a subject, it is important to know about its real-life applications. Let us examine the different applications of a switch and router.