Is German a Difficult Language to Master? 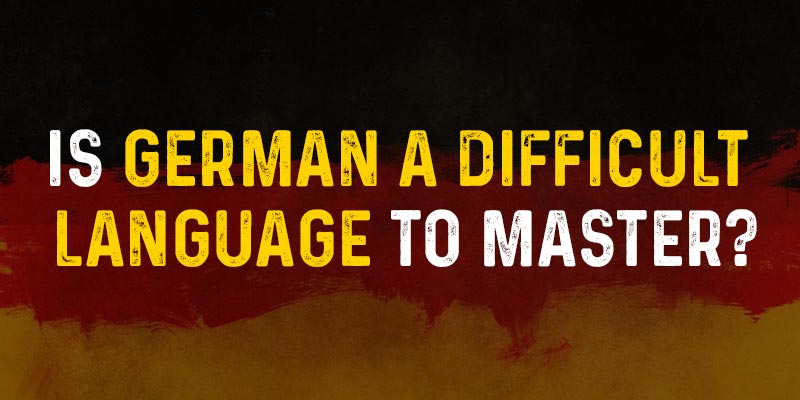 Do you ever wish to increase your lingual knowledge and the thought of “which language is easy to learn?” crosses your mind?

But let us tell you that there is no such language that is universally easy or difficult to learn, it all depends upon the method and understanding of an individual learner.

The art of acquiring a skill in a language majorly depends upon three factors :

If you choose to learn a language that is a linguistic neighbor of your native language or belongs to the same language family, it would be easier.

For example, English, German, Dutch, and Afrikaans all belong to the same linguistic family. Below you can see the similarity between.

But not all languages belonging to the same language family are equally easy or difficult to learn, like, in this case, Dutch is comparatively easier to learn than German.

German can be a moderately difficult language to master because of its four noun case endings, lengthy words, diversity of dialects, and complicated sentence formation.

Despite having a reputation as a language hard to learn, one can learn German with a proper approach. German Classes in Bangalore at FITA Academy provide a learner with that approach through interactive training making you proficient in German under the guidance of expert mentors.

Is German Easy to Learn?

The German language is primarily spoken in Central Europe and is the second most extensively spoken Germanic language following English.It is the official or co-official language of Germany, Switzerland, Austria, Belgium, Poland as well as Liechtenstein.

German is the native language of around 100 million people and more than 130 crore people speak German placing it among the major languages in the world.

German can be broadly categorized into 2 parts: the High German and the Low German dialectal groups. The High and Low German differentiate from each other in the aspect of the sound system, especially regarding the consonants. High German, belonging to the southern highlands of Germany, is the official written language.

Learning German Language Course Online at FITA Academy will provide you with the language essentials giving you an excellent level of skilled German language instructor.

As discussed earlier the answer to the question “Is German easy to learn” relies on the person you are asking the question to. For example, if you ask a person who speaks a language analogous to German, like, Dutch, they would probably say that German is fairly easy to learn, while, if you ask the same question to a person who speaks a language poles apart from German, like French, they would agree that it is a laborious task.

If you are proficient in English it would be easy for you to learn German, as English has Germanic roots which means that English and German have quite similar syntax and grammar and the structuring of sentences is also closely related. Many words sound similar and have the same meaning in both languages. Both, German and English use the same digits ranging from 0 to 9 for numbering and even the same Latin alphabet containing 26 letters, therefore, no need to adjust to a new type of writing scheme.

Given below are some examples of the words which look and sound similar in German and English language and even have the same meaning.

You can see how the words cognate with each other, therefore, they are known as true cognates. But you should keep in mind that this approach does not apply to all the words, as there are a whole other variety of words that look and sound similar but have an entirely different meaning. Like in the case of the word ‘bald’, it means ‘hairless’ in English while in German it means ‘soon. These kinds of words are known as false cognates.

A compound word is a word formed by combining two different words to give it a new meaning. The compound words can be classified into three different types :

Look at the word ‘der Kühlschrank’, if we break it up we get ‘der’: the ‘Kühl’: cool and ‘schrank’: cupboard, giving us the meaning ‘the cool cupboard’ or as we say in English, refrigerator. Some others are simple to understand while others can be complex as they are made by combining many words.

Take, ‘Bundesausbildungsförderungsgesetz’, as an example. It is formed by combining 4 words :

Putting all meanings of words together we get “Federal law for the promotion of education and training”.

To prove the above-mentioned point look at this word in the Polish language, ‘Szymankowszczyzna’, which is the name of a village in Poland. This name is almost unpronounceable.

You see, it is all relative.

At the end of the day, despite any similarities or differences between your proficient languages and the language you want to learn, what truly matters is your dedication and motivation. Your time duration to achieve fluency in a new language would depend upon the amount of hard work you are willing to put in and not how difficult or easy it is. You cannot achieve mastery in a day, try to be patient and work regularly on your skills. Remember, practice makes a man perfect.

German can be moderately difficult to get a grasp of but it is certainly not impossible. There are a million people who have learned German, if they can, then so can you. If you are prompted to learn German check out German Classes in Chennai at FITA Academy who provides a detailed understanding of the concepts of the German language under the mentorship of experts.