Everything you need to know about Java for Beginners 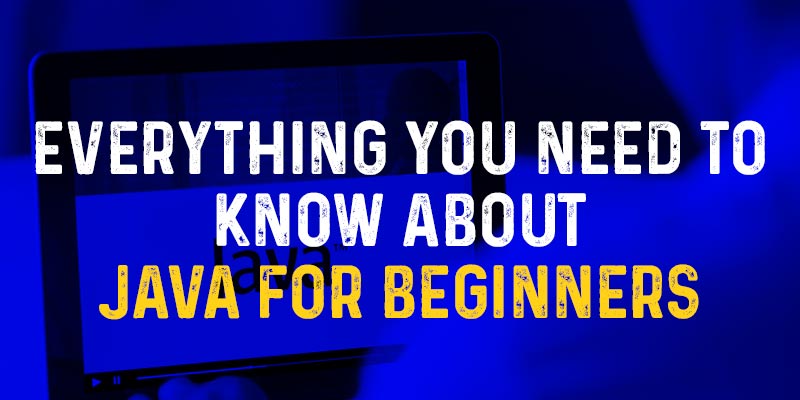 In the early 90s, a programming language was required for the interactive running of television and washing machines. This requirement led to the development of Java.

James Gosling, Mike Sheridan, and Patrick Naughton in 1991 started a project on the development of the Java language. It was developed at Sun Microsoft systems which was later acquired by Oracle. It was initially known as oak and then renamed ‘Java’, inspired by the Java coffee from Indonesia.

This platform-independent feature of java is possible due to its magical bytecode. A bytecode is created on the compilation of Java source code which can then be run on any Java Virtual Machine(JVM) irrespective of the underlying architecture like windows, mac, Linux, etc. Bytecode makes the Java language portable by the ‘write once read anywhere’ feature and allows it to be implemented on a wide range of platforms.

Listed below are some primary features of Java :

Java language is used to develop a variety of applications, which can broadly be classified into four types :

These are the built-in applications present in a machine. They are also known as window-based applications or standalone applications. For example, music player, recorder, antivirus, etc.

These are dynamic applications that run on the server-side. Java classes that help in the development of web applications are Servlet, Spring, JSP, struts, etc.

Applications developed to be used on mobile devices are called mobile applications, Java ME and Android are used for the development process.

These are applications built to satisfy the needs of an organization. They have high security and the ability to optimize the load. Applications such as banking applications or payment processing are examples of enterprise applications. They are created using EBJ (Enterprise Java Bean).

If you want to start learning java from the beginning and have more in-depth knowledge about java, check out Java Training in Bangalore at FITA Academy. They guide you to a broader explanation of the Java concepts.

How to learn Java Programming

Learning to code in Java can be highly beneficial for a programmer as it has a high-demand value.

If you wonder about “How to learn java quickly”, let us tell you that it is important to learn the basics of any programming language to become proficient in it.

Here are some of the Java programming basics :

JRE: It stands for Java Runtime Environment. It is kind of a subset of JDK, intended for end-users, containing parts of required Java libraries to run Java programs.

JVM: It is an abstract machine known as Java Virtual Machine. It provides a runtime environment for the execution of the java bytecode. JVMs are available for many hardware and software platforms.

Java is a platform-independent language but its programming environment components i.e, JDK, JVM, and JRE are themselves platform-dependent.

Just like any other programming language, Java has its own fixed set of rules and syntax for defining and declaring its components.

Comments are lines in the code that are ignored by the compiler. Comments are used to make a code more human-readable. They contain the details about the code and make debugging much easier.

There are 3 types of comments in Java:

Documentation comment: These are used while writing codes for software packages or big projects. These contain the reference and description of all the methods and parameters used. It makes use of various tags for better understanding.

* HTML tags can also be used

These are memory locations and the basic units of storage in a program.

In java, all variables must be defined before using. These are ‘type name’ pairs,

There are 3 types of variables:

Local: Declared within a block or method. Can only be accessed in the block.

Instance: Declared outside a method or block and has a class-wide scope.

Static: Defined with the keyword ‘static’ and can be called without an object. Only one copy of the static variable per class is allowed.

All variables in java have a data type. Each data type requires specific memory storage and has its unique features. They can be classified into 2 types”

Primitive data type: These are single-valued data types without any special characteristics.

Non-Primitive data type: They contain the reference address of the stored variable value and are also known as reference data types.

These are reserved words used for some predefined process. These words cannot be used as object names or variable names.

Operators are useful in performing mathematical and logical operations. They are the foundation of any programming language. Operates are used on operands for computations.

Java provides a range of operators suitable for every need. Some of these operators are :

These statements are used in decision-making. If a situation is true a certain block of code would be executed and if it is false some other code would. Control statements help in controlling the flow of execution of the program based on specific conditions.

Loops are used for the continuous execution of a code until the desired requirement is met. Java allows the use of the following three loops:

For loop: It has a structure of initialization, condition, and increment/decrement written in the same line inside the round brackets. It provides shorter and easy debugging code.

While loop: It contains a boolean statement inside round braces according to which the loop runs. It is an example of an entry control loop as it checks the condition at the beginning of the loop.

Do-while loop: It is similar to the while loop. The only difference is that it checks the condition at the end of the loop, after executing all the statements. It is an example of an exit control loop.

Java is a highly in-demand language that can be used to build a variety of applications. Its versatile features like portability, robustness, security, platform independence make it a game-changing technology in today’s world.

Java is used in a range of companies like finance, logistics, mobile development, healthcare, e-commerce websites, IT, education, and much more. Java software developers get paid a good amount for their work.

Java has a very deep and powerful support community that can always help you out whenever you are stuck. Java is here to stay and will undoubtedly remain in demand in the coming generation.

If you are enthusiastic about how to start learning Java, we suggest you go through Java Training in Chennai at FITA Academy. They integrate learners with high-level skills and in-depth training in Java programming.

Recent Post: The Importance of Data Science in Everyday Life