Reasons Why Python is Taking the Software Industry by Storm 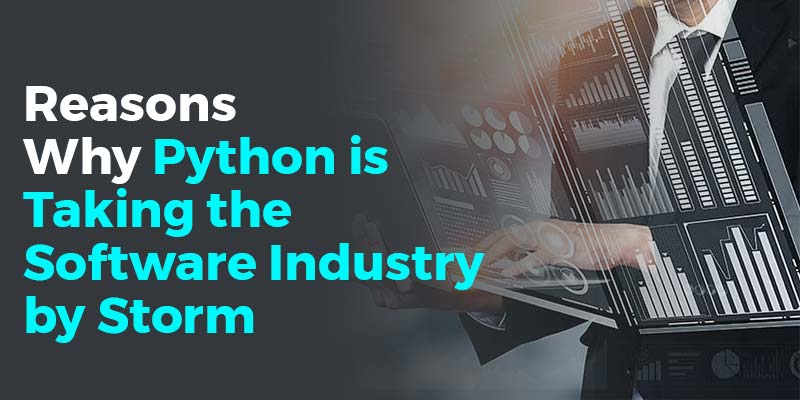 The Python programming language has been climbing the popularity charts since it was created in the late 1980s.

People were initially skeptical about this newcomer, but a lot of that changed in the mid-90s when Guido Van Rossum released version 1.0 of his creation and made it open-source software.

While Python was built for simplicities sake, it has proven itself to be a versatile language that can be used in many contexts.

It is not only the simplicity of Python that makes developers love it; it's also the fact that they can use their new skills on different platforms and deploy them fastly.

The following section will focus on the main reasons why Python is such a great programming language.

First, let's get started with an example of what you can do with Python:

In this simple example, you have created a website that you will run on any operating system.

Now let's look at some more reasons why Python is so great:

1.Python is easy to learn

One of the main reasons why people love Python is that it's a great language to learn.

It has a clear and simple structure so that you can pick up some basics fairly quickly regardless of your skill level.

There are also lots of online tutorials available for all different types of developers. You can learn about both the language and its capabilities, so you shouldn't have trouble building Python projects after gaining some initial knowledge.

2. It's great for beginners and experts alike

Another reason why people love Python is that it has a very low barrier to entry.

This means that if you are an absolute beginner with programming, it's easy to get started with Python.

However, if you have some experience under your belt (or even none at all), the same applies; it is really easy to pick up on how Python works.

You will also notice that most of the best programmers in the world are using Python for their projects, so it's definitely a language that can take you far in your career if you choose to work with it.

3. It boosts your productivity

This is another reason people love Python; even though it's easy to learn, it doesn't lack power and functionality.

The reason why it boosts your productivity so much is mainly due to the fact that there are lots of libraries available for Python.

These libraries allow you to do more with less code, which obviously makes it easier for you to achieve what you want.

A good example of this is an online book store created in Python by author Al Sweigart. In the article, Al shows how you can create a Flask web application with just a few hundred lines of code.

4. It is interpreted, not compiled

If you have programmed in C++, for example, you might have noticed that your programs need to be compiled before they can be executed.

This means that you have to create an application, save it and then run it on your computer. While this process isn't too complicated, it does take time before you can see the results of your code.

Python doesn't require compilation because it is interpreted as you are running it.

This means that you don't have to wait for your program to be compiled before it can be executed.

While this makes the programming process a lot faster, it also has disadvantages - mainly regarding security and portability.

5. Python is widely used in the software industry.

In the years since it was created, Python has been used in a variety of areas.

It is also the most commonly taught introductory programming language at top universities in America.

This makes it a great choice for developers looking to carve out a career in the industry.

Now that you have seen some of the reasons why Python is such a great language, maybe it's time to start learning it.

There are lots of free resources available for you to use, including tutorials and guides that can help you learn Python quickly and easily.

Another option is paying for a Python Online Course, which will go into more detail. You can look into the Top 10 Python training institutes in Chennai which offer the best Python programs.

Suppose you prefer a classroom program in a Metropolitan city. In that case, you can enroll in a course that provides Python Training in Chennai that allows you to interact with the instructor and other students.

Whatever path you choose, it's fairly clear that Python is a great language that will only continue to grow in popularity as more people become aware of its capabilities.

Recent Post: How Data Science is the Study of Methods to Collect and Analyze Data